Chantelle right before we brought her home from The Elms

This is the story of a yearling miniature donkey that was attacked by a pack of  3 dogs in 2014 which belonged to a neighbor. This story hopefully will enforce the fact that mini donkeys are not guardians. They are small,vulnerable to predators and must be protected!

It did not take very long of owning a donkey to realize they have a very alert and protective nature. We always kept our minis in the barn at night and turned them out into a small field during the day. Our fencing is sturdy and we never had any concerns about them getting out. At the time we were novice to the breed, we did not realize that mini donkeys are vulnerable to predators, just like sheep and goats.

Chantelle was among the first 5 donkeys we purchased  and during her first few hours on our farm we realized she was special. Her bray was as loud as a jack and she made her presence known immediately. She quickly established herself as herd leader among our small herd even though she was just a yearling.

On the morning of February 8,2014 we turned our little long ears our into their field and went to the house to get ready to go visit family. About 45 minutes later we drove down the drive to leave. The horror that we saw next will forever be etched in our minds! There was our little Chantelle in the snow being attacked by 3 large dogs. We got to her as fast as possible,all the time witnessing two dogs ripping at her rear and a large pit bull tearing her face apart.

They did not stop as we yelled and honked. Bill, myself, and Aaron ran to her, Bill kicked at them and they ran off as we screamed.

It was horrific and blood was splattered everywhere in the snow. We quickly got her on a tarp and pulled into our feed room where we could get a heater on. It was 22 degrees that morning and she went in to shock from the blood loss and trauma.

As I called to find a vet that could come right away, Bill was on his way to the neighbors that owned the dogs. The sheriff came and a report was made. They took pictures of the dogs covered in blood and of Chantelle's wounds.

The vet arrived 40 minutes after the attack and started giving her fluids and steroids to stabilize her shock symptoms.

Amazingly, she began to nibble at hay in about 3 hours despite her muzzle being shredded and pulled away from her gums. She stood up 4 hours after the attack.

Her wounds were extensive to the right hip, her face, and she had bite marks all over her. We slept with her for the first few nights.

The days ahead were long and stressful as we did not know if she would live or die. Our local vet made many visits to debride tissue from the wounds as she lost more and more of her muzzle & hip.

​On February 26 she went to the University of Missouri and underwent several reconstructive surgeries.

It is now 4 years later and Chantelle has made a full recovery. Her wounds are still visible as she misses the left side of her muzzle and a large portion of her hip.

Since this happened we have installed dog resistant fencing and purchased a livestock guardian Great Pyrenees.

We are huge advocates for the safety of miniature donkeys and educate anyone we can get to listen. The pictures below tell the story! 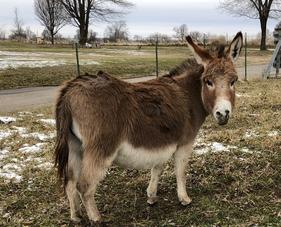 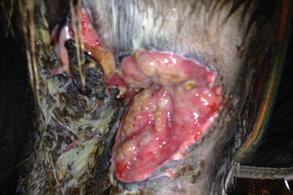 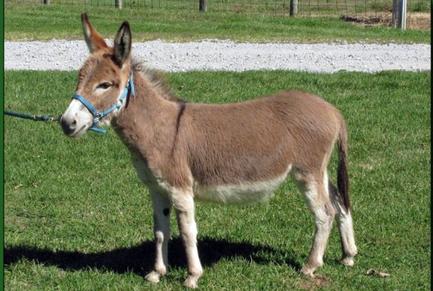 Please never use mini donkeys as guard animals and protect them from predators! 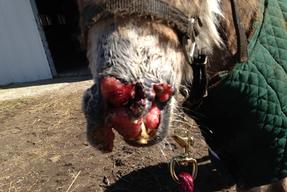 Bred to My World Cheyenne for April 2018 foal 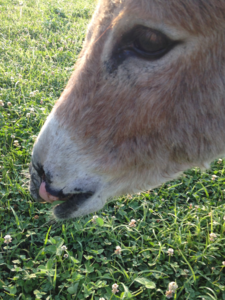